Unions, Pickets and High Court Judgements - Women behind the Bar

Women have a long traditional of working in, and indeed owning pubs in Ireland, going back to the on-site sales of the brews of alewives from homes across the country.
And there is plenty of scholarly writing on the role of women in brewing and retail of alcohol during this period, including a fine blog on the topic by a Trinity PhD. Specifically for Dublin, there is this piece for a historical journal covering 17th Century female brewers and alehouses.
Some of my own personal interest in pub history comes from a woman running a pub, via genealogy, with the mother of my great-grandfather's third wife ("great great grandmother", while inaccurate, is easier to write) having operated N0105 The Deers Head in the 1910s; claiming successfully for £5 11s7d damages caused to the premises during the Rising 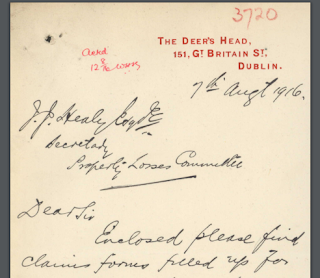 However, it isn't even fifty years since women working behind the bar - or on the floor - of pubs became accepted in Dublin's unionised pubs. The term used during the period where this was debated was "barmaid", which is what I will use in this post - although I don't think its particularly appropriate in the modern era.
Distilled down, there were two factors in the push against barmaids - misguided concern for their health from working in an 'unsuitable environment for women'; and pure sexism, attempting to protect jobs for men only. However, possibly due to how many women actually owned pubs in Ireland, only the latter ever really crops up here.
While Irish licencing laws were separate from those in Britain even prior to Independence, the situation in British law is worth looking at, and with a particularly Irish tinge to what happened
There was a "Joint Committee on the Employment of Barmaids" which reported to the British Government in 1905, recommending that they be banned entirely. Interestingly, a review of this report in The Economic Review in 1906 claimed that "The custom of employing women as barmaids is practically unknown in Scotland and Ireland"
Various Bills attempting to bring in such a ban, either allowing existing barmaids to continue working, or throwing the claimed 100,000 of them in employment in England and Wales at the time out of their jobs, were floated after this report up until the 1908 Licensing Bill, but were dropped. A significant element in this was the formation of the Barmaids Political Defence League by Eva Gore-Booth - the sister of Constance Marcievicz - and their temporary disruption of the political rise of Winston Churchill in the process.
This defeat didn't stop later suggestions to bring in such a ban, on ever more spurious grounds, though, this being from 1930

So, with no prohibition on women working in the trade in Ireland, a long tradition of them doing so and female owned pubs around the country, were there many barmaids in Dublin? Apparently not 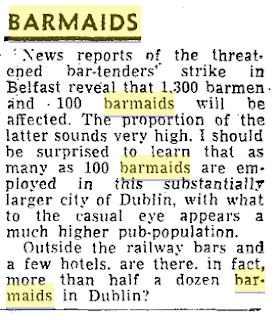 Irish Press, December 17th, 1962
With newspaper journalists of that era often being heavy drinkers, it is likely that they would be quite able to answer that question themselves!

There was a reason for this however - Dublin's then strong barmans union (the Irish National Union of Vintners', Grocers' and Allied Trades Assistants - now part of MANDATE) prohibited the employment of women in unionised pubs, and the majority of Dublins pubs were unionised. Most non-union pubs were smaller, family operated premises with the larger and busier pubs that made up most of the volume of the trade, and of employment of external staff, being signed to union agreements. While the union organised across Ireland and indeed the UK; the majority of its membership was in Dublin.
Dublin's infamous longest strike - that at Downeys pub in Dun Laoghaire - actually related to the replacement of a unionised staff member with a barmaid
The first attempts to get this ban overturned came from a less than ideal source - the publicans union (Licenced Grocers and Vintners Association) seeking to be able to employ barmaids so that they could pay them less than men, this being explicitly legal until 1974. That barmaids were frequently employed beyond the reach of INUVGATA was also raised. 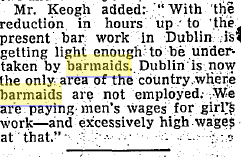 Irish Press, June 18th, 1964
The INUVGATA argument against women raised in their periodical, as quoted in the Herald on October 20th, 1966, was that allowing women in on lower wages would destroy the future careers of apprentice baman, who by this stage were actually doing some form of professional training - I presume via CERT which came in to being in 1963. Obviously the idea of just paying women the same escaped them.
While INUVGATA and the LGVA may have not allowed barmaids, we already know they did exist - and indeed some were also unionised - I would imagine mainly those in hotels, based on being in the ITGWU who, as their successor union SIPTU, are still a major union for hotel staff.. The union successfully fought for a pay increase for their 35 members in the trade in 1967. 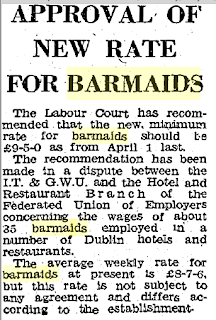 Irish Independent, 15th July, 1967
This was still significantly less than men were being paid, as was the standard at the time.
The LGVA next floated the idea of hiring women in late 1969 - identical stories appear in the Herald and the Independent within a few days of each other - but this time it is a shortage of apprentices being given as the reason rather specifically saying they wanted to pay them less.
The INUVGATA first acceded to women working in unionised pubs in 1972; but not at the bar. It was an agreement over the hiring of what would now generally be called 'lounge staff', but possibly more accurately called waiters in the agreement with the LGVA

Irish Press, 29th May 1972
This agreement came some months after the High Court had ruled that a ban on women working in pubs was unconstitutional, judgement by Mr Justice Kenny in this case being reported in March 1972; arising from an injunction against picketers and INUVGATA over pickets that had begun in 1971.
These were far from the only pickets over the hiring of women, but detailing every picket by the union would be a pointless task (which is why I only bothered listing cases of the actual customers picketing in another article)
I have not, yet, been able to find at what point INUVGATA allowed women to become members and hence work in unionised pubs - it was not well reported as far as it seems - but it may have been part of the National Wage Agreement 1974. This was done in the run-up the aforementioned 1975 legislation requiring equal pay (in theory, this is) which would have removed their main concern.
Additionally, the legislation which prohibited gender bars like this was tabled in 1975, becoming law in 1977
I wouldn't be surprised if a trip to the Labour Court archives could help here; but that currently isn't possible.
The first reference I can find to INUVGATA barmaids is in the Irish Independent of October 6th, 1977, when a union rep claimed to have ten women as members, two of whom were chargehands (supervisors)
Posted by Cian Duffy at 08:54